Cancer is a disease caused by cells growing uncontrollably and spreading to other body parts. The primary site where the cancer cells develop is called a tumour, whereas when it spreads to the other parts, the site is called a secondary tumour or metastasis.

Based on its origination, doctors have divided cancer into four major types:

Prostate cancer is carcinomic cancer which affects the prostate gland in males. If detected in the early stages, it is highly treatable.

Prostate cancer occurs in males when the cells in the prostate gland begin to grow uncontrollably. The prostate is the male reproductive organ located just below the urinary bladders surrounding the urethra.

It is a very common cancer in males, and if detected in the early stages, it can be cured successfully. One out of every nine men has prostate cancer.

The prostate is a walnut-sized gland in the males located under the urinary bladder and the penis. The urethra runs through the middle of the prostate gland allowing urine to flow out of the body.

The prostate gland’s primary function is to produce semen and balance the hormone metabolism.

The numerous stages of cancer describe the seriousness of the condition. Like all other cancers, knowing the stage of prostate cancer helps the doctor treat it effectively and decide a future course of action. 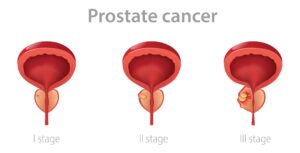 The four prostate cancer stages are:

Some of the primary  prostate cancer causes and risk factors are genetic history, age, obesity, excessive smoking/drinking, and ethnicity. Males who suffer from chronic high blood pressure are more prone to prostate cancer than other men.

Studies and research have also established some links between prostate cancer and medicinal exposure and medical conditions. Sexually transmitted infections like syphilis, gonorrhoea, chlamydia, etc., can increase the risk of prostate cancer.

With the correct treatment, prostate cancer can be effectively cured. However, that is only possible when an accurate and timely diagnosis has been made.

Once you visit a doctor, we will ask you questions regarding your condition and symptoms. Your personal medical history and genetic history will also be considered while making a diagnosis of prostate cancer.

There are multiple physical exams which are also used for prostate cancer diagnosis.

In a digital rectal exam, the health practitioner will insert a gloved and well-lubricated finger into your rectum to feel the prostate gland. The prostate gland will be poked slightly to check for lumps or other abnormalities.

A transrectal ultrasound is very similar to a digital rectal exam. However, a probe is inserted into the rectum instead of using a finger to check the prostate. The probe also produces high-energy sound waves to make echoes and produce a sonogram.

The sonogram is then read carefully to make a correct diagnosis.

However, some men can sometimes have a high PSA level because of an infection or inflammation in the prostate region.

Often a transrectal biopsy is also ordered by doctors to diagnose prostate cancer. A tissue is scrapped from the prostate gland by inserting a thin needle into the prostate through the rectum.

A pathologist then examines the tissue to look for cancer cells.

As mentioned before, with a timely diagnosis and efficient treatment plan, prostate cancer can be cured successfully in the early two stages.

Some highly efficient treatment plans available for prostate cancer are:

In a traditional open prostatectomy, the prostate will be removed by making a long incision on the rectal region.

However, the open prostatectomy has now been alternated with laparoscopic prostatectomy, in which several small incisions are made rather than a long one to remove the prostate using special tools.

As surgeons, sometimes we prefer holding the tools ourselves or using robotic arms for the same.

In the external and internal radiation, radiations are focused on the prostate gland from outside the body.

In radiopharmaceuticals, certain medicines containing radiation are injected into the body. It is less invasive and has proven highly efficient in earlier stages.

The goal of hormone therapy, also referred to as androgen suppression therapy, is to reduce androgen, the male hormone, in the body. Once the androgen level is reduced, the growth of cancer cells is also reduced.

However, hormone therapy alone cannot treat cancer. It is used to slow down and eliminate further growth.

In immunotherapy, certain medicines are used to inhibit the growth of cancer cells.

However, immunotherapy has side effects like fever, weakness, constant fatigue, back pain, nausea, etc.

During chemotherapy, chemo drugs are injected into the veins as an infusion. Sometimes chemo drugs like Docetaxel, cabazitaxel, and mitoxantrone are also used to treat prostate cancer.

Living with prostate cancer can be very difficult as it requires a lot of lifestyle changes and mental resilience. Once your cancer has been removed, you will still be required to surveil it closely. After the treatment, the doctor will also want to monitor you regularly.

If you are struggling with prostate cancer or post-treatment care, do not worry. To avail of a stress-free prostate cancer treatment, visit the C.K. Birla Hospital or book an appointment with Dr. Vinay Gaikwad who will provide you with personalized treatment.

The highly qualified healthcare professionals at C.K. Birla hospital will take great care of you using their state-of-the-art facilities and cutting-edge technologies.