Kidney cancer is a rare but life-threatening type of cancer that can develop in the kidneys or tissues surrounding the kidneys.

This type of cancer, which represents approximately 3% of all cases of cancer, has been increasing in prevalence over the past few decades and accounts for 1% of all deaths by cancer in India.

Kidneys are two bean-shaped organs the size of a fist each, located behind the abdominal muscles on either side of the spine.

Kidney cancer or renal cancer starts in the cells of the kidney and is one of the most common cancers in adults. The incidence of kidney cancer has been increasing over the past few decades.

The most common kidney cancer symptom is having a mass or lump in the abdomen. In the initial stage of a kidney tumour, it may not be so noticeable, but as it develops over time, one may experience the following symptoms:

Although the exact cause is not known, several risk factors have been identified. Kidney cancer is more common in men than women and tends to occur more often in those over 60. However, it can be found in people of all ages.

Here are some of the primary kidney cancer causes:

Kidney cancer is most often diagnosed through a combination of a physical exam, imaging tests, and biopsy.

Treatment will depend on the type of cancer, its stage, the patient’s overall health and preferences. Surgery, radiation therapy, and chemotherapy are the most common kidney cancer treatment options.

If the cancer is at an early stage and has not spread outside of the kidney, surgery is often the best option. If the cancer has spread, radiation therapy or chemotherapy is necessary.

Partial nephrectomies may cause scarring around the kidneys, which could lead to more problems in the future.

Radical nephrectomies and hemicolectomies are more likely to cause this problem because they involve removing larger sections of tissue than partial nephrectomy.

Ablation is a less invasive procedure for treating kidney cancer. It involves using heat or cold to destroy the tumour cells.

The patient can go home soon after having the ablation done, but it requires going into the hospital for several days before treatment so that the doctors can monitor closely.

Interstitial radiation therapy uses a special kind of X-ray machine to give high doses of radiation directly to the tumour cells in the kidneys. Radiation therapy delivers high-energy rays from a machine, similar to what we see from the sun, that targets cancer cells.

The goal is to kill those specific cells while limiting damage to healthy tissues.

Chemotherapy drugs are injected into the bloodstream or taken orally. They travel through the whole body, killing off fast-growing cells such as cancerous ones.

Side effects from chemo vary depending on the drug and person but include hair loss, nausea, vomiting, diarrhoea, mouth sores, and weakness.

The newest approach to kidney cancer is targeted drug therapy. These medications target proteins found in tumours and stop them from growing and dividing. They are different from traditional chemotherapy because they do not affect normal cells as normal cells do.

One example of a targeted drug is Sutent (sunitinib malate), which blocks growth signals made by proteins called VEGF receptors.

Immunotherapy is also new to the fight against kidney cancer. The immune system naturally fights against foreign invaders like bacteria and viruses, but it sometimes mistakenly attacks healthy cells.

There is no definite method to prevent it, but it is possible to lower the risk by making healthy lifestyle choices.

If you have any of the following symptoms, you should see a doctor as soon as possible: 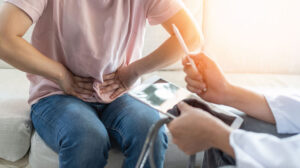 Other, less serious conditions can also cause these symptoms. But it’s always best to err on the side of caution and get checked out by a doctor.

You must see a doctor immediately if you’re experiencing any kidney cancer symptoms. Kidney cancer is a serious disease, but with early detection and treatment, many people can make a full recovery.

CK Birla Hospital is dedicated to providing the best possible care for our patients. If you or someone you know has been diagnosed with kidney cancer, we are here to help. Our team of experts will work with you to create a treatment plan tailored to specific needs.

We offer various treatments, including surgery, chemotherapy, and radiation therapy. We also provide support services to help you through this difficult time.